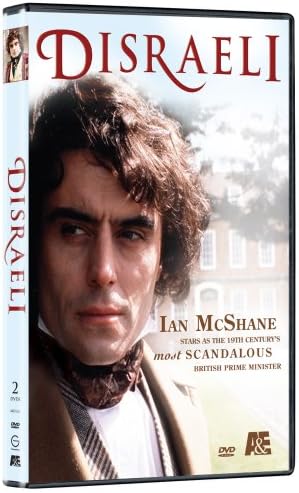 Anglophiles will find much to admire in the 1978 production Disraeli, a comprehensive look at the political and personal lives of one of that nation's most important historical figures. Benjamin Disraeli (1804-1881), played by Ian McShane ("i"Deadwood, "i"The Golden Compass) in a bravura performance, was "an enigma even to myself," as he puts it. Born to Jewish parents but baptized into the Anglican Church as a boy, he had already established a reputation as an author of "scandalous" novels, not to mention a silver-tongued flatterer and ladies man, when he began pursuing his political ambitions in his early thirties. His career didn't exactly get off to a flying start; it took him five tries to win a seat in Parliament as a "progressive conservative," and even then his defiant, blustery style earned him little favor among the somnolent stiffs who comprised much of that august body, some of whom dismissed him as "a tinseled coxcomb" whose attire resembled that of "an Italian dancing master" (Disraeli was known to sport lavish amounts of jewelry early in his career). Anti-Semitism didn't help, either. But he persevered, going on to serve twice as Prime Minister (the first and thus far only Jew to do so) and proving himself to be an eloquent and able leader with a dynamic vision that government should be more than simply a monarch ruling through an enlightened aristocracy (Rosemary Leach charmingly plays Queen Victoria, the monarch in question, with whom Disraeli formed a close and fruitful relationship).

The series also details his personal life, focusing on his 33-year marriage to the considerably older Mary Anne Lewis (Mary Peach), the widow of Disraeli's former patron and a seemingly frivolous chatterbox whom he admittedly married for her money ("I never intend to marry for love," he said. "It's a guarantee of unhappiness"), only to end up completely devoted to her. Along the way, Disraeli and his fellow politicians also deal with issues ranging from India and the Suez Canal to Ireland and the looming threat posed by Germany's "Iron Chancellor," Otto von Bismarck. All of this is accomplished primarily with words (including Disraeli's own, as well as those of scriptwriter David Butler), and there are lots of them. Disraeli isn't exactly action-packed--indeed, this is a genteel, stately, and occasionally rather tedious undertaking--but those willing to stick with it for its four-plus hours will find no shortage of rewards. "i"--Sam Graham

Golden-Globe winner Ian McShane (Deadwood, Sexy Beast) gives an acclaimed performance as the color and flamboyant politician Benjamin Disraeli. Heading a powerful British ensemble cast, McShane captures the charm, determination, and political brilliance that won Disraeli the favor of Queen Victoria and eventually the nation. Beautifully shot on location, and spanning five decades this multiple-Emmyr nominated, original miniseries and is an engrossing portrait of one of Britain's most controversial leaders.