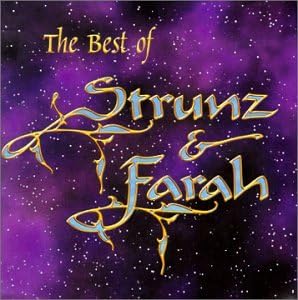 For the past 20 years, highly accomplished guitarists Jorge Strunz and Ardeshir Farah have pioneered the style of guitarra Latina, blending various Latin, Afro-Latin, jazz, and flamenco styles into an intoxicating brew that they have occasionally peppered with Middle Eastern influences. From their fiery 1980 debut, Mosaico, to the Grammy-nominated world beat of 1992's "i"Américas to their more subdued recent effort, "i"Wild Muse, the critically acclaimed pair and their four-piece backing band have inspired numerous neo-Latin and neo-flamenco guitar twosomes in the States. But their imitators lack the spark that makes Strunz amp; Farah's music so visceral. The evidence is here in the slow, sensual mood piece "El Jaguar" (with its exotic pre-Columbian winds), the mystical "Rainmaker" (featuring an intense, traditional Tarahumara chant from Mexico, courtesy of wind player-percussionist Luis Peréz), and the lively Mediterranean vibe of "Zagros" (featuring bouzouki player Danny Papakalos). As always, what remains impressive about Strunz amp; Farah is their ability not only to conquer their guitars with some dazzling fingerworks but also to contrast that velocity with some tastefully low-key compositions. It proves that they are more than just acoustic speed demons. The duo picked the best songs from their most popular albums, excluding the often hard-to-find Guitarras, Frontera, and Misterio, solid releases in their own right. True aficionados will argue about what is the best of Strunz amp; Farah, given that a two-CD set could easily have been compiled from their rich catalog, but long-time fans and newcomers to their world will be captivated by the music on this collection. As a bonus, the album opens with "Levantina," a preview of what the next Strunz amp; Farah album will sound like. --Bryan Reesman