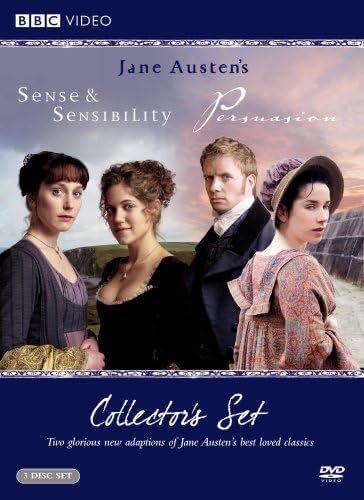 Lush, dramatic, and beautifully acted, the BBC's three-part miniseries "i"Sense amp; Sensibility captures the languid urgency that resonates throughout the Jane Austen novel on which it is based. The miniseries begins with a seduction scene: As a young girl cautiously gives herself to a man, she asks, "But when will you come back?" He answers ominously, "Soon... very soon," and gallops off into the night. We know what she does not--that he will not return for her. But viewers do not learn until the end who the couple are, and how their actions set off a chain of events. It is inevitable that this period piece will be compared to the 1995 big screen adaptation that starred Emma Thompson, Kate Winslet and Hugh Grant, and won Thompson an Academy Award for Best Adapted Screenplay. To its credit, this later version stands up incredibly well, with actors whose looks match Austen's written description. And due to a longer running time than the film version, there is more attention paid to detail and minor characters. Sense amp; Sensibility focuses on the longings of the Dashwood sisters Elinor (Hattie Morahan) and Marianne (Charity Wakefield). After their wealthy father dies, leaving his entire estate to their milquetoast half brother John (Mark Gatiss), Elinor, Marianne, their younger sister Margaret (Lucy Boynton), and their mother are left penniless. John and his shrew-like wife Fanny move into the manor, making the Dashwoods feel like unwanted guests. It is only after Fanny's handsome and kind brother Edward Ferrars (Dan Stevens) arrives for a visit that Elinor feels happy again. Marianne, too, has attracted the attention of two suitors: serious and shy Colonel Brandon (David Morrissey) and dashing Willoughby (Dominic Cooper). Learning that the 35-year-old colonel is interested in her, a stunned Marianne says, "You do realize that it will be impossible for me to speak to him again." Her actions are that of a little girl, running away and hiding when he comes to call on her. But her feelings for Willoughby are real: the kind of love a girl feels for the first time. The differences in the sisters' choices, actions, and secrets set the tone for an era when a perceived impropriety could ruin a woman's reputation and her family's standing in a community. Filmed in England with good use of aerial shots, the production has a sweeping feel that adds a distinct flavor to the drama. As with many Austen novels, the heroines in Sense amp; Sensibility go through many misunderstandings before their happily-ever-after ending. But that ending leaves viewers satisfied that things turned out just the way that they should.

Austen fans will be delighted with the second disc in this set: Miss Austen Regrets is a perfect companion to the miniseries, starring Olivia Williams stars as the author, and Greta Scacchi--who could easily pass as Williams' real-life sibling--as Austen's sister Cassandra. The film takes a bittersweet look at Austen's life and hints at what could have been had she married one of her suitors. Smart and headstrong, Austen refuses to cave into society's notions of what a proper woman should do. While her famous heroines all paired up with dashing gentlemen, Austen found that the loves of her life were her written creations. --Jae-Ha Kim

On the third disc of this set is the sumptuous production design and first-rate acting in the 2007 Masterpiece Theatre version of Persuasion. Sally Hawkins is controlled and moving as Anne Elliot, the quietly heartbroken but sensible heroine who was "persuaded" (read: forced) to turn away her true love but still carries an unseen torch for him. Hawkins's performance is genteel yet steely, and the quiet strength of the entire production. Hawkins looks alternately quietly lovely and sadly pinched--as one might expect the long frustrated Anne to look. Other highlights include a post-"i"Buffy Anthony Head, as Anne's clueless, blustery father, Sir Walter. Head gets to turn on his deft comic talent here in ways most American audiences have not yet seen him; he's clearly enjoying himself immensely, blustering about "my shrubberies" and other trivial affairs. The cinematography is lush (several breathtaking tracking shots are used, especially early on), as are the period costumes. The production was filmed exclusively on location, and the reality of the sets enforces the story. Some fans may prefer the 1995 Amanda Root version, for the casting of Ciaran Hinds as Capt. Wentworth, but this later effort is a worthy entry in the Austen film oeuvre--and Rupert Penry-Jones is a dreamboat in his own right. As the wistful Anne says, on behalf of all women, "We do not forget you, so soon as you forget us." --A.T. Hurley

1) Sense and Sensibility From acclaimed writer Andrew Davies (BBCs Pride and Prejudice starring Colin Firth) comes this enchanting new adaptation of Jane Austen's classic novel about love and marriage. Marianne Dashwood wears her heart on her sleeve when she falls in love with the charming but unsuitable John Willoughby, ignoring her sister Elinor's warning that her impulsive behavior leaves her open to gossip and innuendo. Elinor, sensitive to social convention, struggles to conceal her own romantic disappointment, even from those closest to her. Will the sisters learn that sense must mix with sensibility if they are to find personal happiness in a society where status and money govern the rules of love? 2) Miss Austen Regrets A biopic unraveling the secrets of the elusive author based on Jane Austen's actual letters and diaries. 3) Persuasion Anne Elliot fell deeply in love with the handsome young naval officer Frederick Wentworth at the age of nineteen. But with neither fortune nor rank to recommend him, Anne was persuaded to break off her engagement. Eight years later, Anne has lived to regret her decision. She never stopped loving Wentworth, and when he returns from sea with fortune and rank, she can only watch as every eligible young woman in the district falls at his feet.